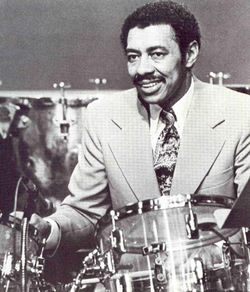 Mr. Humphrey was one of the drummers on Marvin Gaye's album "Let's Get It On".

Humphrey also was the featured drummer for both the Lawrence Welk orchestra and television show from 1976 to 1982. He and his wife Joan are the parents of two children, Pier and Damien, who appeared with their father on the Welk show's annual Christmas episode.[1]