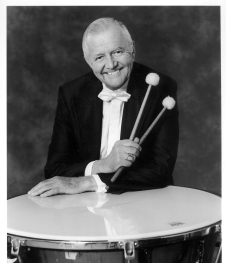 Everett "Vic" Firth - timpanist, educator, entrepreneur and composer - says that he was "honored and delighted" when informed of his election to the PAS Hall of Fame. "Compliments from one's peers are the thing a person values most," he said, "so I feel it is a great distinction to be selected for the Hall of Fame."

Born June 2, 1930, in Winchester, Massachusetts, and raised in Maine, Firth is the son of Everett E. and Rosemary Firth. His father was a successful trumpet and cornet player who started young Vic on the instrument when he was only four. Fortunately for the world of percussion, Firth was not destined for a career as a cornetist. He soon began to study arranging, with additional lessons on trombone, clarinet, piano and percussion. By the time he was in high school, he had gravitated full-time to percussion, studying first with Robert Ramsdell and later with George Lawrence Stone, Salvy Cavicchio and Larry White. By the age of sixteen he was actively pursuing a career as the leader of his own 18-piece big band, playing vibes and drumset throughout the New England area.

Firth's teaching career at the New England Conservatory also began before he had graduated, first in the preparatory department, then as head of the percussion department, a position he has held since 1950. He has guided numerous gifted students through their education, not only at the conservatory, but also at the Berkshire Music Center, Tanglewood, summer home of the BSO. Percussion students who have studied with Firth hold key positions throughout the world. He is hesitant to mention outstanding pupils, but he fondly recalls a class on percussion techniques for a Copland seminar that included three young conductors - Claudio Abado, Zubin Mehta and Seiji Ozawa.

When asked about Firth's teaching style, The Late Show with David Letterman drummer Anton Fig, who studied with Firth at the New England Conservatory, stated that "Vic is a very dynamic and forceful individual. He draws you into his highly productive work ethic. His lessons give you clear direction, not only with music but with life. He provides a balanced role model for the importance of work, family and compassion for other human beings."

This work ethic, along with the support from his wife, Olga, and two daughters, Kelly and Tracy, provided the drive to succeed in the business world in addition to performing music. Unsatisfied with the sticks available during his early years, Firth, like many percussionists, began making his own. Realizing that a concert violinist might spent $2,000 to $10,000 on a bow, he though it strange that a superior quality stick was not widely available for symphonic percussionists. He began with timpani mallets, making round heads with no seams. As his students began using his sticks and dealers began asking for them, he made the decision to expand the manufacturing process.

Unlike his other successful business ventures - an investment partnership and an art gallery - Firth had no clear plan for developing his stick business. The driving principle was quality, with a guarantee that each pair would be straight and matched in pitch. What began in 1960 as a basement operation out of his home has now expanded into a corporation with two plants, a main office and over 150 employees to handle the manufacture and worldwide sales of his sticks. Firth proudly cites the active involvement by his family in the day-to-day operations of his business. Anyone who has visited the Firth booth over the years at PASIC has probably met Olga, Kelly or Tracy.

Although most young percussionists are familiar with the name Firth because of his sticks and mallets, many promising students first encounter Firth's musical substance through his numerous compositions and etudes. "Encore in Jazz" is a staple of the percussion ensemble repertoire, and his The Solo Timpanist etude book has set the standard for audition material at the all-state or college-entry level. Few students seriously study timpani without sweating over etudes from this book.

As a performer, Firth recalls memorable performances with such legendary conductors and musicians as Leonard Bernstein, Serge Koussevitsky, Leopold Stokowski, Jascha Heifetz and Vladimir Horowitz. "Vic is quite simply the consummate artist," says Boston Symphony Orchestra conductor Seiji Ozawa. "I believe he is the single greatest percussionist anywhere in the world. Every performance that Vic gives is informed with incredible musicianship, elegance and impeccable timing. I also feel very lucky to count him as a dear and cherished friend, and it has been one of the great joys of my life to get to know him and his dear wife Olga."

Asked what his key to success has been, Firth responds, "I still enjoy the music as much now as I did when I started! The [Boston] Symphony just performed Tchaikovsky's Sixth Symphony, and it was as beautiful as the first time I heard it." Other keys to succeeding include a highly competitive nature and enthusiasm for life. "Mostly though," says Firth "I've just been in the right place at the right time."

Perhaps no one summarizes Firth's esteem in the percussion community better than jazz drummer Peter Erskine. "I have had the great pleasure of knowing Vic personally for twenty-five years," Erskine says, "and thanks to television and recordings, I have known his great music-making as timpanist of the Boston Symphony for even longer. And I have used his sticks since high school. Vic is the consummate musician, teacher and business person. No matter whose drumstick or mallet you use, we must all be grateful to Vic Firth for raising the level of stick and mallet design and production. Simply put, I wouldn't want to make any of my music without his sticks, and I cherish the friendship of the man and his family. Congratulations, Vic!"[2]