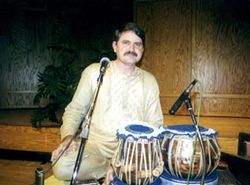 David Courtney has been performing on the tabla since 1972. He first studied pakhawaj (an ancient barrel shaped drum) under the famous Zakir Hussain at the Ali Akbar College of Music. He then moved to India and spent a number of years learning tabla under the late Ustad Shaik Dawood Khan of Hyderabad. He is also well versed in dilruba, and esraj. For these instruments, he received his initial training under Sayed-ur-Rahman of Hyderabad and later under Pdt. Atma Ram Sharma. He has also received training in santur under the late Hasaan Mohd., and sarangi under Mohd. Aslam Khan. He has performed extensively on stage, TV, disk, and radio, in India, Europe and the United States. Along with his wife, he composed the theme music for Houston's Indian TV program called "ASIANA" and recorded the theme music for the radio program "INDIA FILE" which aired in the Austin area. He has accompanied many great musicians including Ashish Khan, Lakshmi Shankar, and Pandit Jasraj

He is well versed in the academic side of music. During the 80s he received great acclaim in academic circles for his pioneering work in the application of computers to Indian music. This work is found in his dissertation "A Low Cost System for the Computerization of North Indian Classical Music". He is the author of numerous books and articles on the subject of Indian music including, Introduction to Tabla, Elementary North Indian Vocal, Learning the Tabla, Fundamentals of Tabla, Advanced Theory of Tabla, Manufacture and Repair of Tabla, Learning the Sitar, and Focus on the Kaidas of Tabla. His articles have appeared in "Modern Drummer" and "Percussive Notes". Along with his wife Chandra, he was given an award of recognition for outstanding contributions to the arts by the American Telugu Association. In 2009, he and his wife were designated as "Cultural Jewels of India" by the Indian Cultural Centre of Houston

He is very active today in musical activities. He is an artist with Young Audiences. He is also the percussionist in the fusion group Vani, and has several CDs to his credit. Recently he composed and performed some music for the film "Dancing in Twilight", a film staring Erick Avari, Louise Fletcher, Mimi Rogers, Kal Penn, Sheetal Shet. He has also recorded the film score for the film short "Ravennaside", "Finders Keepers", and "Cosmogenesis".[1]