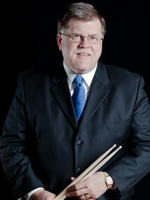 Robert Breithaupt enjoys one of America's most diverse musical careers as a performing musician, arts administrator, college professor, author and entrepreneur. He is Professor of Music and Department Chair of Jazz Studies/Music Industry at Capital University, and has developed one of the most recognized undergraduate percussion programs in the United States.

His performance credits include recordings, appearances, and tours with a wide variety of artists including Eddie Daniels, Monty Alexander, Terry Gibbs, John Abercrombie, Paul Anka and Perry Como. Bob has served as the Executive Director of The Jazz Arts Group of Columbus since 2001 and has held the chair as the drummer of the Columbus Jazz Orchestra since 1981.

Bob has served as an extra percussionist with the Columbus Symphony and the ProMusica Chamber Orchestra and continues to perform with many of the nation's finest orchestras and ensembles. He has received many honors and awards including Bowling Green State University's Outstanding Graduate Award in 2001, and 2004-2005 membership in the Jefferson Center Leadership Academy.

He has published many articles in Modern Drummer, Percussive Notes, and Bandworld and is the author of The Complete Percussionist. Robert was part owner of Columbus Pro Percussion, Inc., one of America's largest independent percussion retail outlets, and is Director of the Summer Drum Set Workshops. Bob is a Past President and a current member of the Board of Directors for the Percussive Arts Society.[1]