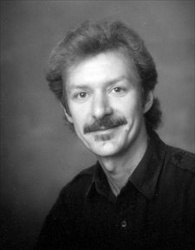 Jesper Hendze was born in 1955 in Funen. He studied percussion and composition at The Carl Nielsen Academy of Music Odense, at the State University of New York and at the Music Academy in Jutland with composers like David Felder, Per Nørgård and Karl Åge Rasmussen. Jesper Hendze had his dèbut concert as a composer in 1993. In 1991 he was awarded with the three-year grant from The Art Foundation of the State.

Jesper Hendze's music represents many genres. His works include Stunt ­performance for tuba (1999), The Beauty Of the Beast for saxophone quartet (1990), Courtly Manners for flute, guitar and cello (1992), Don Floats On for four el-guitars, el-bass, percussion and drums (and two saxophonists in diving suit) (1999) and Laika in Orbit for improvising solo percussionist and four groups of instruments (1998).

Jesper Hendze is the chairman of the department for computer notation in The Danish Composers' Association.[1]

In 1991 Jesper Hendze received a three-year grant from The Danish Arts Foundation. Presently he is in charge of the Danish Composers' Society's studio for computerized music notation.