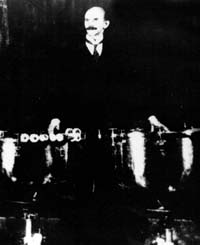 Alfred P. Friese, a graduate of Leipzig Royal Conservatory, was originally trained as a violinist, and his musical proficiency on this instrument won him the prized Artist Diploma and subsequently a position in the Leipzig Gewandhaus Orchestra. It was during this time at Leipzig that he became interested in the timpani and began to study with the orchestra's timpanist, Hermann Schmidt. His first major timpani engagement was with Hans Winderstein's Orchestra. In 1902, he was invited by Franz Scheel to come to the United States to become one of the founding members of what would later become the Philadelphia Orchestra. Mr. Friese then moved on to become timpanist with the Pittsburgh Symphony under Emil Paur. When Gustav Mahler established the New York Philharmonic on a regular salaried basis in 1909, he chose Alfred Friese from among nine competitors for the solo timpani chair. Some of the conductors under whose baton he performed were Fritz Reiner, Arturo Toscanini, Richard Strauss, Gustav Mahler, Arthur Fiedler, Eugene Ormandy, Igor Stravinski, Leopold Stokowski, and Sir Thomas Beecham. In May of 1926, Mr. Friese opened his School for Timpani, the first of its kind. He also served as chairman of the percussion department of the Manhattan School of Music. His method of timpani instruction, the Friese-Lepak Timpani Method, has become a standard text for the instrument.

Alfred Friese is remembered as one of the world's foremost timpanists and teachers.[2]