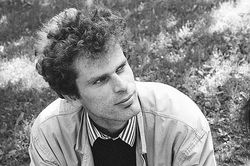 The composer Jan Rokus van Roosendael was born on May 6, 1960 in Zwijndrecht. He passed away on February 17, 2005 in Oostzaam. Van Roosendael's real name was Jan Rokus de Groot, but he took his Grandparents name in order to avoid confusion with his brother Rokus de Groot who is also a composer. He was married to the composer Sinta Wullur. For a long time he took his inspiration from Asiatic music. In this he was a kindred spirit to Ton de Leeuw. This influence was heard in among others the compositions Tala and Sringhara. In later years his music was characterized by a religious vein, such as Psalm 139 which falls back on early polyphonic techniques. This work was composed for the Nederlands Kamerkoor.[1]