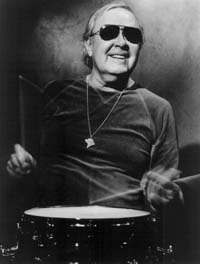 A brilliant drummer, Joe Morello played early on with Phil Woods and Sal Salvador. He had short stints during 1952-1953 with Johnny Smith, Stan Kenton's Orchestra, and Gil Melle, but really gained a strong reputation for his work with the Marian McPartland Trio (1953-1956); he also played during the period with Tal Farlow and Jimmy Raney. Morello gained fame as a member of the Dave Brubeck Quartet during 1956-1967, making it possible for Brubeck to experiment with unusual time signatures. Due to his failing eyesight (he went blind in 1976), Morello mostly worked as a drum instructor in later years (Danny Gottlieb was a student), but still played and participated in reunions with Brubeck and McPartland. He led sessions for Score (1956), RCA (1961-1962), Ovation (1969), and DMP (1993-1994). Morello died on March 12, 2011 at his home in Irvington, NJ. He was 82[3]