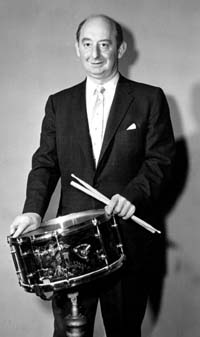 Mentions: Inducted into the Percussive Arts Society "Hall of Fame" (1974)

Famed percussionist, teacher, and author Morris Goldenberg’s work centered around New York, where in 1938 he became percussionist at WOR. He played for recordings, film scores, TV commercials, served on the NBC-TV staff, and eventually performed for most of the major conductors. His fame as a teacher stems from his affiliation with the Juilliard School of Music from 1941 to 1969. His Modern School for Snare Drum, Modern School for Xylophone, and books of timpani parts have become standard texts and excerpt sources.[1]