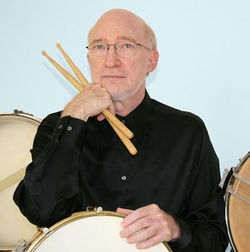 Born on June 22, 1947 in Allentown, Pennsylvania, Bob Becker holds the degrees Bachelor of Music with Distinction, and Master of Music (Performance and Literature) from the Eastman School of Music where he studied percussion with William G. Street and John H. Beck, and composition with Warren Benson and Aldo Provenzano. As an undergraduate he was also awarded the school's prestigious Performer's Certificate for his concerto performance with the Rochester Philharmonic. He later spent four years doing post-graduate study in the World Music program at Wesleyan University where he became intensely involved with the music cultures of North and South India, Africa and Indonesia. As a founding member of the percussion ensemble NEXUS, he has been involved with the collection and construction of a unique multi-cultural body of instruments as well as the development of an extensive and eclectic repertoire of chamber and concerto works for percussion.

Becker's performing experience spans nearly all of the musical disciplines where percussion is found. He has been percussionist for the Marlboro Music Festival and timpanist with the Marlboro Festival Orchestra under Pablo Casals. He has also performed and toured as timpanist with the Kirov Ballet and the Tafelmusik Baroque Orchestra. For several years he toured as drummer and percussionist with the Paul Winter Consort. He has performed and recorded with such diverse groups as the Ensemble Intercontemporaine under Pierre Boulez, the Ensemble Modern of Germany, the Schoenberg Ensemble of Amsterdam, and the Boston Chamber Players. In 2003 and 2004 he performed as percussionist with the Grand Teton Music Festival Orchestra. He has worked with today's most significant conductors including, among many others, Seiji Ozawa, Zubin Mehta, Christoph Eschenbach, Sir Andrew Davis, and Michael Tilson Thomas. In 1988 he directed and performed in the show SuperPercussion at the Tokyo Music Joy Festival, which brought together NEXUS, the Korean percussion group Samul-Nori, drumset artist Steve Gadd, and Ghanaian master drummer Abraham Adzenyah.

His work with African percussion traditions includes study and performance with master drummers Abraham Adzenyah, Gideon Alorwoye, and Freeman Donkor, as well as with mbira specialist Paul Berliner. In 1986 he traveled to Senegal, Mali, Ivory Coast, and Kenya as the representative of the World Drums Festival of Expo '86. He was co-founder and the first director of the Flaming Dono West African Dance and Drum Ensemble in Toronto, a group devoted to learning and performing the dance-drumming styles of the ethnic groups in present-day Ghana.

A disciple of Pandit Sharda Sahai, the foremost exponent of the Benares tabla style, Becker began his study of Hindustani music in 1970. He has since appeared with many of India's leading artists including sarangi virtuoso Ram Narayan, sarodist Amjad Ali Khan, composer and flutist Vijay Raghav Rao, and vocalists Laksmi Shankar, Pandit Jasraj, and Jitendra Abisheki. In addition, he has worked closely with some of the most significant American exponents of Indian classical music - sitarist Peter Row, bansuri flutist Steve Gorn, and sarodist Steve Oda. For several years Row, Gorn, and Becker performed together as the Vistar Trio. Becker made his tabla solo debut in 1982 at the Nagri Natak Academy Concert Hall in Benares, India.

Becker co-founded the percussion group NEXUS, which gave its first performances in 1971 and continues to perform around the world. The ensemble has toured extensively throughout North America, Europe, and Asia, performing in chamber music venues as well as with symphony orchestras, and has recorded over twenty-five CDs. With NEXUS Becker has appeared as soloist with the New York Philharmonic, the Boston Symphony, the Chicago Symphony, the Philadelphia Orchestra, the Cleveland Orchestra, the San Francisco Symphony, and the Los Angeles Philharmonic, among many others, and has received the Toronto Arts Award and the Banff Centre for the Arts National Award. In 1999 he and the other members of NEXUS were inducted into the Percussive Arts Society Hall of Fame.

Becker has been a regular member of the ensemble Steve Reich and Musicians since 1973. With this group he has appeared as soloist with the Israel Philharmonic, the Brooklyn Philharmonic, the New York Philharmonic and the London Symphony and recorded extensively for Deutsche Grammophone, EMI and Nonesuch. In 1998 the ensemble won a Grammy award for its recording of Reich's Music for 18 Musicians. Becker has been a featured performer in all of Reich's percussion music, including Drumming, Piano/Marimba Phase, Six Pianos/Six Marimbas, Sextet, and Nagoya Marimbas; the large ensemble and orchestral pieces, such as Tehillim, The Desert Music, and City Life; and also the recent large-scale theater works, including The Cave and Three Tales.

Generally considered to be one of the world's premier virtuoso performers on the xylophone and marimba, Becker also appears regularly as an independent soloist and clinician. In particular, his work toward resurrecting the repertoire and performance styles of early 20th century xylophone music has been recognized internationally. He has appeared as xylophone soloist at the Blossom Festival, the Eastern Music Festival, the Meadow Brook Festival, the Grand Teton Music Festival and with orchestras and concert bands throughout the United States. Since 2000 he has directed an annual ragtime xylophone seminar at the University of Delaware, Newark, DL, which has attracted an international student body. In 1998 he was concertmaster, marimba soloist, and xylophone soloist with the 164-member Musser Festival Marimba Orchestra, conducted by Frederick Fennell, at West Point, NY. In 2005 he was again concertmaster and soloist with the Clair Musser World's Fair Marimba Orchestra at Northwestern University, Evanston, IL.

Becker has performed and lectured for music departments and percussion programs throughout North America and Europe. His clinics and workshops cover a wide variety of percussion topics including North Indian tabla drumming, West and East African percussion,"melodic" snare drumming, rudimental arithmetic, creative approaches to cymbal playing, and ragtime xylophone improvisation concepts. In 1996 and 2001 he was a Guest Lecturer for the Banff Centre for the Arts, Banff, Alberta. In the fall of 2002 he was a jurist for the Geneva International Music Competition in Switzerland and in 2005 he was a member of the jury for the International Percussion Competition Luxembourg. He has served as editor for the contemporary percussion issue of the British publication Contemporary Music Revue and served for two years on the board of directors of the Percussive Arts Society. For the fall term of 2005 he was appointed Lecturer in Percussion and Director of the Percussion Ensemble at Rutgers University, New Brunswick, NJ.

Since 1988 he has been associated with the Malletech Company, where he helped design the Bob Becker Concert Xylophone as well as a successful line of signature xylophone mallets now used by percussionists around the world. As an endorser for the Sabian cymbal company he has helped design special instruments for applications in symphonic and contemporary chamber contexts, the Becker Bowing Cymbal being one result. In 2005 he received Sabian's Lifetime Achievement Award. In 2006 he was recognized as a "Master Drummer" by the International Association of Traditional Drummers, an organization founded by the legendary rudimentalist John S. Pratt.

Becker's compositions and arrangements are published by Keyboard Percussion Publications and are performed regularly by percussion groups world-wide. He also has a long history of association with dance, and has created music for the Joffrey Ballet in New York, among others. In 1991 he and Joan Phillips were awarded the National Arts Centre Award for the best collaboration between composer and choreographer at Toronto's INDE '91 dance festival. Recent works include There is a Time, commissioned by Rina Singha and the Danny Grossman Dance Company, Noodrem, commissioned through the Canada Council by the Dutch ensemble Slagwerkgroep Den Haag, Turning Point, composed for the NEXUS ensemble, Cryin' Time, a setting of poetry by the Canadian artist Sandra Meigs, Never in Word and Time in the Rock, settings of poetry by the American author Conrad Aiken, and Music On The Moon, commissioned through the Laidlaw Foundation by the Esprit Orchestra in Toronto. Five of his compositions are included on his solo album, There is a Time, released in 1995 on the Nexus Records label. In the spring of 1997 he was selected to be composer-in-residence for the Virginia Waterfront International Festival of the Arts which featured the United States premiere of Music On The Moon by the Virginia Symphony, conducted by JoAnn Falletta, and a concert of his chamber works by his own group, the Bob Becker Ensemble. In April, 2005 he was featured during the 25th Anniversary of the Budapest Spring Festival as guest soloist with the Hungarian percussion ensemble Amadinda in a concert of his own compositions. In July, 2009 he was showcased at the first International Belgian Percussion Festival as soloist with the Swedish percussion group Kroumata in a concert featuring his own compositions and arrangements. He recently completed work on a book titled Rudimental Arithmetic, an in-depth study of the mathematical bases of the rudiments of snare drumming and their applications in composition and polyrhythmic theory, released by KPP in 2008. His most recent compostion, Preludes, was premiered in August, 2011 at the Roots and Rhizomes Percussion Residency at the Banff Centre for the Arts in Banff, Alberta, with Steven Schick conducting. The 20-minute work is in two movements, scored for string quartet, piano, glockenspiel, vibraphone, marimba and timpani, and was commissioned by the Banff Centre.[2]